10 Tasty and filling 30-minute meals to master this term

28 Jan 2020
By Unite Students, Staff writer at The Common Room

Protein, complex carb, veg. This holy trinity is the cornerstone of every great home-cooked meal. Increasingly, people are getting their protein from things that aren’t meat, and this can only be good for mother Earth.

But whether you’re a committed carnivore, or a voracious vegan, this combination of food groups will help you get the nutrition you need from meals that are simple to cook.

Here are 10 tasty, staple meals that are ready in half an hour. Really good spag bol is not a fast food. When you’ve got the time, cook your bolognese on a low heat for a couple of hours. But when you’re in a rush, you can do this in half an hour. Make a big batch, keep it in the fridge, and the portions you eat in a couple of days will taste even better.

Peel and dice an onion and crush two cloves of garlic. Fry them in a splash of oil until soft. Add 500g of mince and cook until brown, then drain off the liquid. Crumble in an Oxo cube, and add salt and pepper. Pour in a tin of chopped tomatoes, a large handful of sliced mushrooms, and stir. Simmer for 30 minutes and serve with cooked pasta. 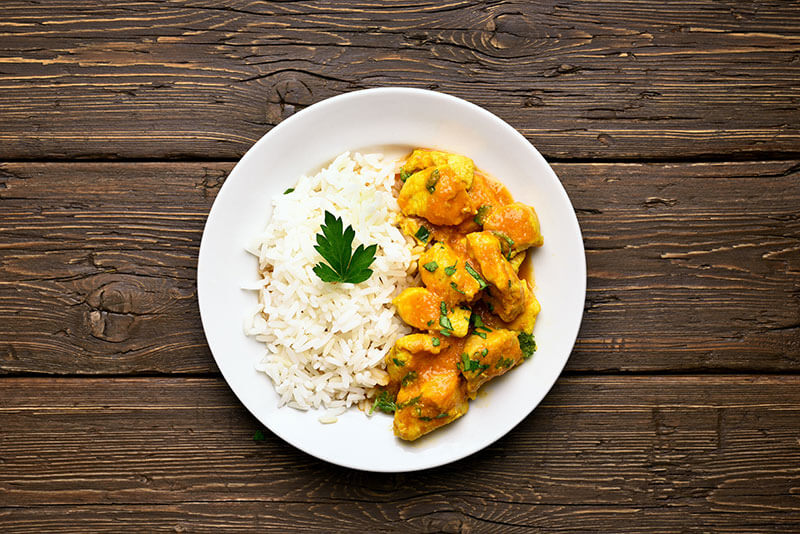 Chicken and veg, or just veg? You decide. If you are doing a veggie version, use potatoes, butternut squash, or chickpeas for a bit of bulk. Prefer a creamier curry? Swap the balti paste for korma, and the tinned tomatoes for coconut milk.

Peel and dice an onion and fry in oil. Add half a jar of curry paste and fry with the onion for a few minutes. Add 500g of diced chicken and/or veg and fry for five minutes. Add a tin of chopped tomatoes and 200ml veg stock, bring to the boil, reduce to a simmer, and cook for 20 minutes. 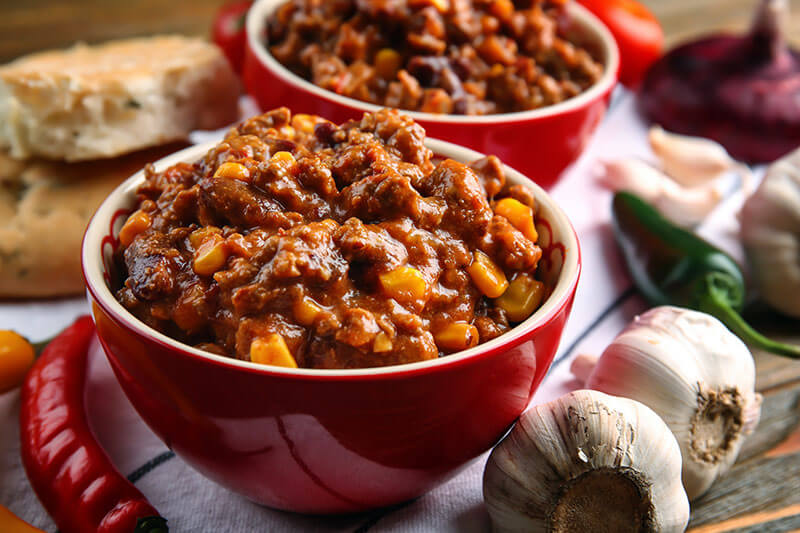 Much like its Italian cousin the Bolognese, chilli con carne is best cooked slowly for a couple of hours. But you can still make a delicious Mexican meal in half an hour. Feeling lazy? Buy a ready-made spice mix. Otherwise, chili powder, paprika, and cumin will get the job done.

Peel and dice an onion, crush two cloves of garlic, and fry in a splash of oil. Add 500g of beef mince, fry until brown, and drain the liquid. Add two teaspoons each of chilli powder, cumin, and paprika and 150 ml water, a tin of chopped tomatoes, a tin of red kidney beans (drained), a tin of sweetcorn (drained), salt and pepper, and simmer for 25 minutes. 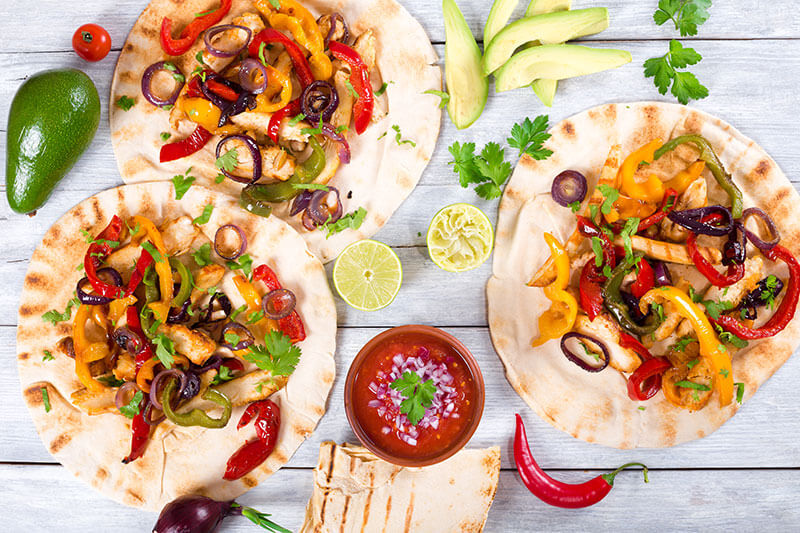 Sticking with the Mexican theme, fajitas are an absolute winner when making dinner for your flatmates. All the cooking takes place in one large pan, you just need a microwave to soften the tortilla wraps. Again, ready-made seasoning or separate dry spices - it’s up to you.

Peel and slice an onion, deseeded red pepper and green pepper and fry until soft. Remove from the pan, then throw in 500g of thinly-sliced chicken breast. Fry until browned, then add the onions and peppers. Sprinkle over one teaspoon each of chilli powder, cumin, paprika, and garlic powder, fry until the chicken’s cooked through, and serve with wraps, sour cream and chive dip, grated cheese, and some salad leaves. Perfect party food. 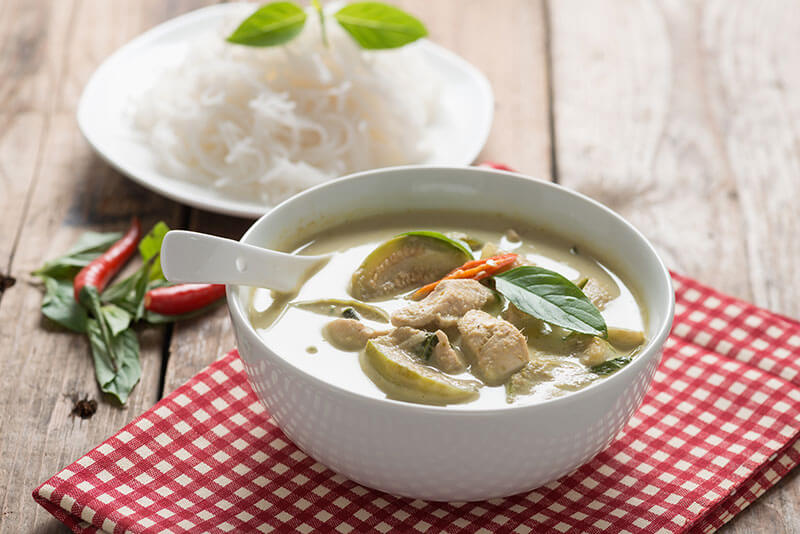 Don’t bother trying to make your own paste (unless you’re feeling really adventurous). Again, this is a chicken and veg dish - but veggies can use Quorn pieces or quartered new potatoes. Serve with rice or noodles.

Fry 500g of diced chicken breast in a tablespoon of oil until browned (quarter and par-boil your new potatoes if you’re using them). Add chopped veg (broccoli, green beans, and baby corn work great) and fry for a few minutes. Add a jar of curry paste and a tin of coconut milk, stir, and simmer for 15 minutes. 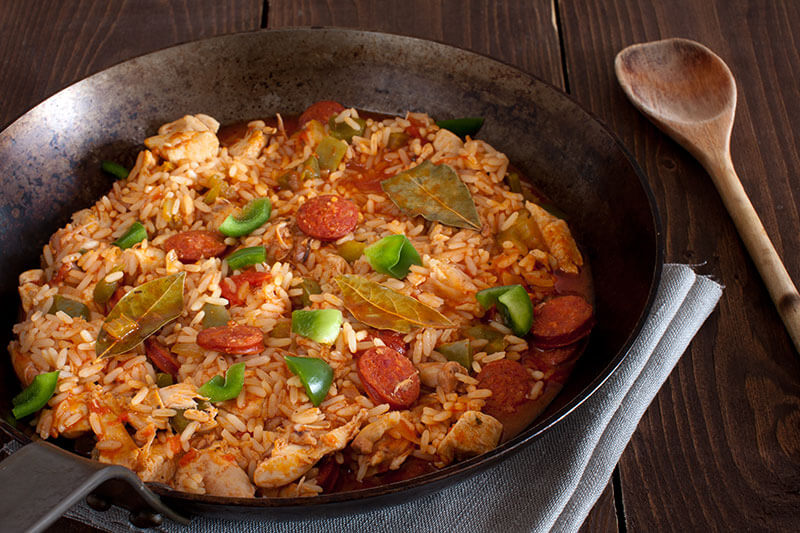 Bet you haven’t made this before. It’s so easy, a true one-pot classic that you’ll want to cook again and again. Spicy, filling, meaty or veggie (or both) - this New Orleans classic has all the attributes to become your new favourite dinner.

Fry a peeled and diced onion, crushed garlic, one deseeded and diced green pepper and one red. Soften, then add 500g of diced chicken, a teaspoon of cajun spice and another of chilli flakes, and fry until the chicken’s brown. Add 300g of uncooked brown rice, a tin of chopped tomatoes, a tin of sweetcorn (drained), 1.5 litres of vegetable stock, stir, and simmer for 30 minutes until the rice is soft and has absorbed almost all of the liquid. 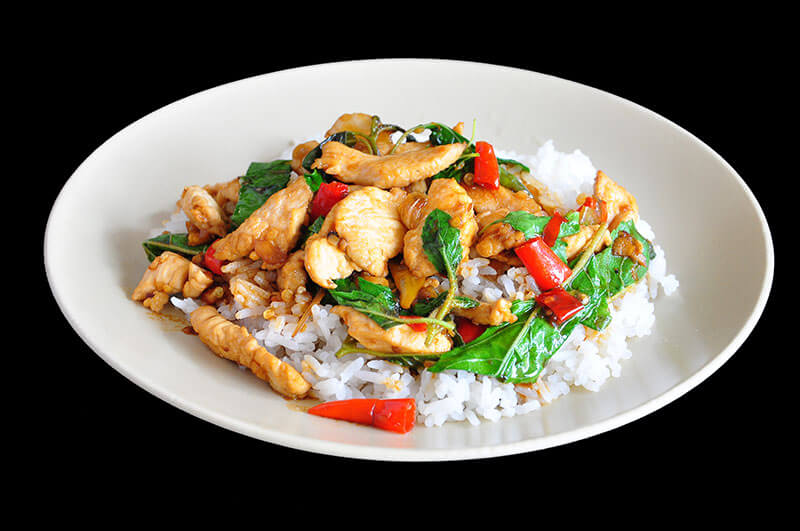 With a nice hot wok, this won’t take anywhere near 30 minutes. Serve with egg noodles, but please don’t buy those straight-to-wok things - they’re expensive and they’re a culinary abomination.

Boil a nest of noodles, drain, and toss in a splash of sesame oil. Heat a tablespoon of oil in a wok, and add 500g of thinly-sliced chicken. Fry until browned, then remove and set aside. Heat another tablespoon of oil, and add crushed garlic, a deseeded and chopped red chilli, a deseeded and sliced pepper, chopped broccoli, and baby corn. Fry for a few minutes, then add two tablespoons of soy sauce, a splodge of honey, and a squeeze of lime juice. Fry until the chicken’s cooked through, combine with the noodles, and serve.

A great meal for when you can’t really be bothered, especially when you want something warm and comforting in the winter. You could use a ready-made pasta bake sauce, but it really is worth making your own white sauce for this.

Preheat your oven to 180 degrees. Boil 500g of pasta twists until almost completely cooked, drain and place into an ovenproof dish. Make a white sauce with 50g of melted butter, 50g of plain flour, and 250g of grated cheese. Pour the sauce over the pasta, and add a tin of sweetcorn (drained), two tins of tuna (also drained). Season, stir, top with more grated cheese, and bake for 20 minutes. Serve with boiled green veg. 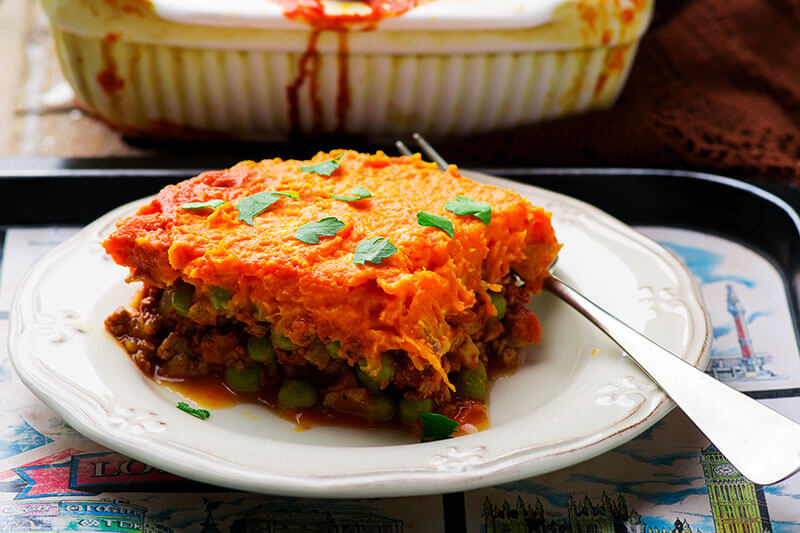 Another winter-warmer favourite, and slightly sweeter thanks to the orange mash. It’s a cottage pie if you’re using beef, a shepherd’s pie with lamb - and let’s call it a greengrocer’s pie if you’re keeping it veggie (here’s a great veggie recipe).

Preheat your oven to 180 degrees. Peel, chop, and boil two sweet potatoes until soft, then drain and mash with butter, salt, and pepper. Set aside. Fry a peeled and chopped onion in a splash of oil, then add 500g of mince and fry until brown. Drain off the liquid, then add your cottage pie spice mix (follow the instructions on the packet), a handful of frozen peas and another of chopped mushrooms. Cook for a few minutes, then pour into an ovenproof dish. Allow to cool slightly, then spoon the mash on top, sprinkle with grated cheddar, and bake in the oven for 20 minutes. Serve with boiled green veg. 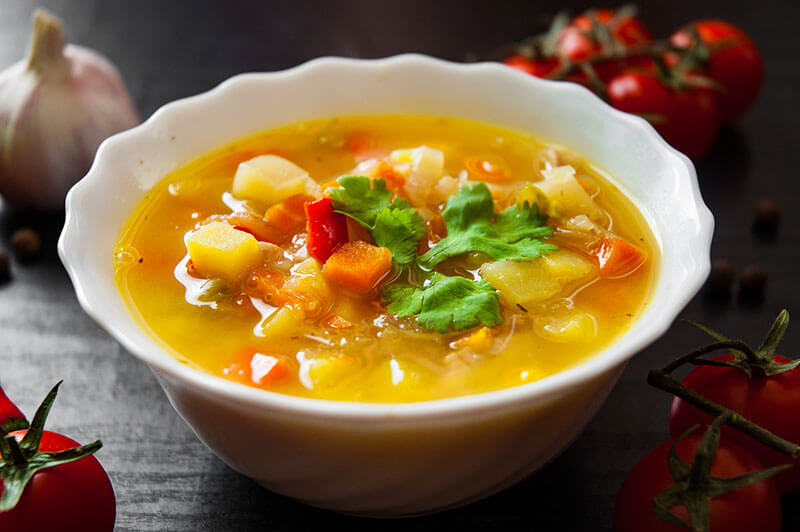 Yet another one-pot wonder for when the winter nights close in. Anybody can make a veggie soup, and this version with rice is both nutritious and filling. If you want to make it meaty, just throw in some sliced cooked chicken breast.

Chop the following into chunks and fry in a stock pot with crushed garlic and two tablespoons of oil: one large onion, two celery sticks, two carrots, and a handful of new potatoes. Fry until everything starts to soften and colour, then add salt and pepper, a crumbled veg stock cube, a litre of water, 150g of long grain rice, and simmer for 20 minutes. Serve with crusty bread and Netflix.

It is a food truth universally acknowledged: we need to eat less meat. It’s important to get enough protein in your diet (around 0.75g a day for every kilogram you weigh) but it doesn’t all have to come from meat.

Most of the recipes above can be adapted to include more beans and pulses and less meat. Cannellini beans, lentils, chickpeas. They’re a great source of protein, filling, and their production is generally a lot easier on the environment than meat.

#Healthy eating#New student#Recipes#Student cooking
f
Enjoyed this article? Give it a like

Student store cupboard essentials: How much does food cost?

Turning vegan isn't scary: Here's how I did it